skip to main | skip to sidebar

U can haz critter

I'm pretty happy with the way this turned out despite the yarn being superwash and hence completely un-feltable: 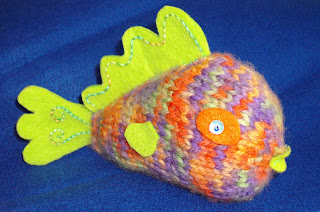 When they say superwash, they do mean superwash - I tried every dirty trick in the book, blue jeans, towels, very hot water, soap - with only a bit of excess fuzz to show for it. Ah well, I did a tidy job with the knitting so it still looks fairly finished! Pattern here for anyone who wants to take a look.
Posted by Valerie at 8:07 PM 1 comment:

UPDATE 4/28: Order received! (And what superbly fast TAT!) There are still a few spots open below. I expect to have all packages decanted and shipped by Wednesday of next week.

I'm running another decant circle for the Possets spring collection for those who missed out on earlier circles (and for my own enjoyment too).

The Taiwanese postal system is pretty speedy and very reliable, so don't be afraid :) If any Asia-based scent addicts would like a bottle or two added to their order to save on shipping costs, just ask and I can do it for you.

On to the scents! 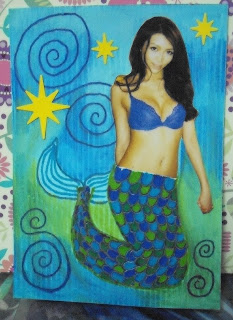 Continuing with the lingerie-collage theme, this is the last of my ATCs for the Andersen's fairy tales swap. It's less 'little mermaid' than 'generic sexy mermaid', but whatever; who doesn't like sexy mermaids? Always a crowd-pleaser. The colours are a bit richer than they appear in the picture. It was lots of fun playing with watercolour pencils.
Posted by Valerie at 6:02 PM No comments:

The ATC assignment this round was Andersen's fairy tales, and the heavily moralising tone and emphasis on princess-ly delicacy just made me snap. 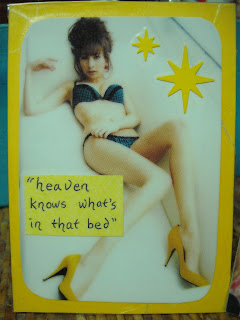 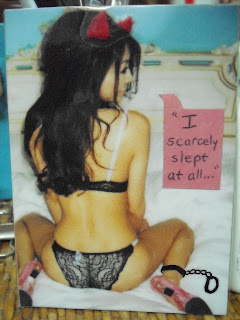 the improbable joy of wet wool

First, a couple of cultural snaps: I woke up to this in my kitchen on Christmas morning (okay, I lie, it was Christmas afternoon by the time I ventured out): 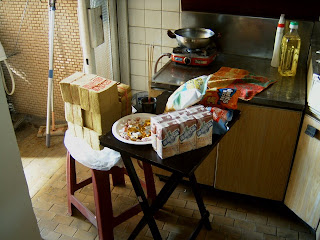 Offering tables like this one are extremely common here, especially on the day of the full moon. The ancestors get offerings of burnt ghost money, incense, and food, and businesses are very keen to make offerings to ensure prosperity. This was the first time I'd ever seen one indoors though (to be fair, it's the first time I've ever spent months living with Taiwanese people). My flatmate had set it up and when I asked her what it was for she said to create peacefulness. A close-up of the goodies: 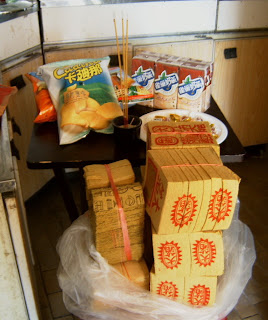 According to local custom, it's perfectly acceptable to eat the edibles after they've sat out for a little while and the deities and/or ancestors have absorbed the mana.

For New Year's I took the early train north to Taipei on the first and spent three days there visiting a friend and doing the tourist thing. It included a fair bit of shopping and after admiring felt beads in the night market I couldn't resist picking up this little toy when I saw it the next day: 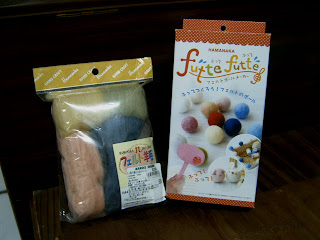 It's basically a mini-agitator for felting wads of roving into little balls that can then be used as beads, keychains, tiny animals, or whatever other bits of funkiness/tackiness you can dream up. I took it out to play with tonight: 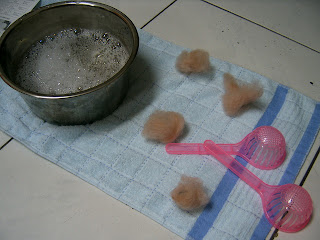 The little fluffballs, once beaten into shape, turn out looking like this: 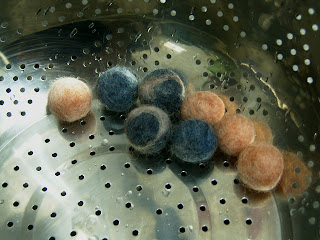 (They're in a colander for a final shock of boiling water before being rinsed and left to dry.)

Not too bad for a first attempt! And now I have something I can actually do with carded wool that doesn't involve a spinning wheel.

I don't do new year's resolutions, but I think maybe a nice *goal* for '09 would be to start taking better pictures. Yikes.
Posted by Valerie at 8:12 PM 1 comment:

ATCs are a thing I've only recently discovered through the swaps forum at bpal.org. Small, cute, and swappable (not unlike imps), they make a fantastic wee project for people like me who have drawers full of craft scraps and a history of lust for miniatures (why yes, I did have a dollhouse growing up).

The first swap I participated in was seasonal-themed. Colours came out a bit wonky in this picture but here they are for the record:

To see what ATCs look like when a real artist tackles them, have a browse at Joumana Medlej's ATC gallery. (Seriously, you want to go and look.)

Last night I went to a gallery show by a co-worker of mine who's leaving the country in a few weeks. All of her photography, paintings, and 3-D collage boxes were available for donations and I was lucky enough to get some beautiful pieces of wall art and photographic prints, including this one:

Her RedBubble page is here and I'm sure she'd be happy if you went by for a browse.
Posted by Valerie at 12:39 PM No comments:

after a long silence

Strange. Tough. Lonely without being alone.

It sinks in a little more each day that it's permanent and for real, that he's not the person I thought he was, and that nothing that could possibly happen in the future is going to change that.

The hardest part is wondering if I'm going to be alone forever - if that, screwed up as it was, is as good as it's ever going to be.

Currently listening to Nirvana and it suits.
Posted by Valerie at 1:35 AM No comments: 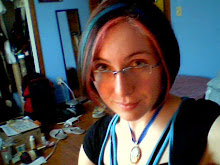 You are The Wheel of Fortune

The Wheel of Fortune is all about big things, luck, change, fortune. Almost always good fortune. You are lucky in all things that you do and happy with the things that come to you. Be careful that success does not go to your head however. Sometimes luck can change.

What Tarot Card are You?
Take the Test to Find Out.